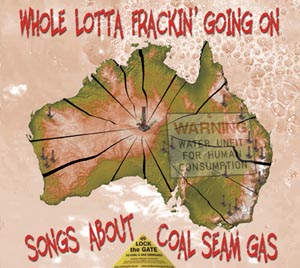 Whole Lotta Frackin' Going On' is a compilation of radio-friendly songs that present vital information about the dangers of 'fracking' and coal seam gas (CSG) mining to our environment, food, water and society.

Fourteen songs in a wide range of genres to suit all tastes, plus interview excerpts with Australian CSG activist Dayne Pratzky, give a variety of viewpoints and firsthand experience of fracking's devastating impact.

I donated a new song I wrote called "Lie To Me", written after watching GASLAND movie (http://www.gaslandthemovie.com/) about the devastation caused to the drinking water and environment and land of many Americans from 'Fracking mining methods' to extract Gas…and we're not safe here in Australia. They have already started impacting here and have huge plans. So we need to get informed and stand up for safe environmental procedures.
John Butler, Ash Grunwald, Rob Hurst form Midnight Oil, Jimmy Barnes from Cold Chisel, to name but a few artists, are all getting behind this incentive. 60 minutes have covered it.
In Byron Bay sunday 16th Oct at 11am, Butler St reserve, people are gathering to peacefully march, and raise awareness. Go to BSANE (Byron Saving Australia's Natural Environment) https://www.facebook.com/Bsane.Action To support BSANE financially, you can purchase the 'Whole Lotta Frackin' Going On' CD from here http://wholelottafrackingoingon.com/  or from iTunes
Here's a video of "Lie To Me"
Another organisation with lots of info is 'Lock the Gate"  http://lockthegate.org.au/

What is Fracking? Why all the fuss?

Hydraulic fracturing (fracking) is a technique used to speed up the flow of coal seam gas (CSG) from underground rock formations. A mixture of water, sand & chemicals is pumped at extremely high pressure into the gas-bearing formation. The process fractures the rock, opening up pathways for trapped gas to flow to the well.

There is considerable concern about the damage caused by the CSG mining industry and the lack of research into the risks involved. Short-term greed is compromising the welfare of future generations. The extreme imbalance between the way the mining companies' rights are measured against the rights of others in the community is indicative of a system that has lost its ethical compass.

Large numbers of chemicals are used in the fracking fluid. The National Toxics Network (NTN) has found that only two out of the 23 most commonly used chemicals have been assessed by our industrial chemicals regulator (NICNAS). They have called for a moratorium until a comprehensive hazard assessment is carried out for all fracking chemicals used in Australia, including their risks to human health, ecotoxicology and environmental outcomes (air emissions, releases to groundwater and watercourses), as well as a full costing of the long term public burden of the cleanup of contaminated areas and the impact on the increased landfill capacity needed to deal with the waste products created by these mining methods. Read the full report here.

Thank you for support in protecting FRESH drinking water http://www.hbo.com/video/video.html/?autoplay=true&vid=1099970&filter=all-documentaries&view=null